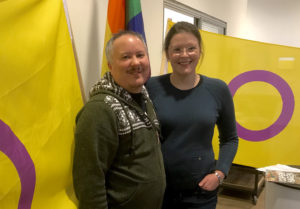 Today OII Europe announced the organisation’s first paid position. Dan Christian Ghattas was chosen by the Steering Board to take the position of Executive Director.

“This is a big step for OII Europe”, says Co-Chair Miriam van der Have. “Dan will continue our fight for the human rights of intersex people, and this new position will help building our capacity as an organisation”.

“Volunteer work is still an important pillar of OII Europe’s work”, adds Kitty Anderson, “but we feel the responsibility to develop OII Europe towards a fully staffed organisation in the very near future.”

“I am incredibly happy and proud of what the OII Europe Steering Board has achieved in the past two years”, says Dan Christian Ghattas. “Serving now as OII Europe’s Executive Director to me is a privilege and an absolute joy. We will continue our work towards OII Europe becoming an even stronger organisation, in order to ensure intersex people’s enjoyment of their human rights within the Council of Europe region and beyond.”

As of today Dan Christian Ghattas has resigned from his former position as OII Europe’s Co-Chair. Kitty Anderson, OII Europe’s secretary, has been chosen by the Steering Board to temporarily serve as Co-Chair until the organisation’s General Assembly on the 17th of March.