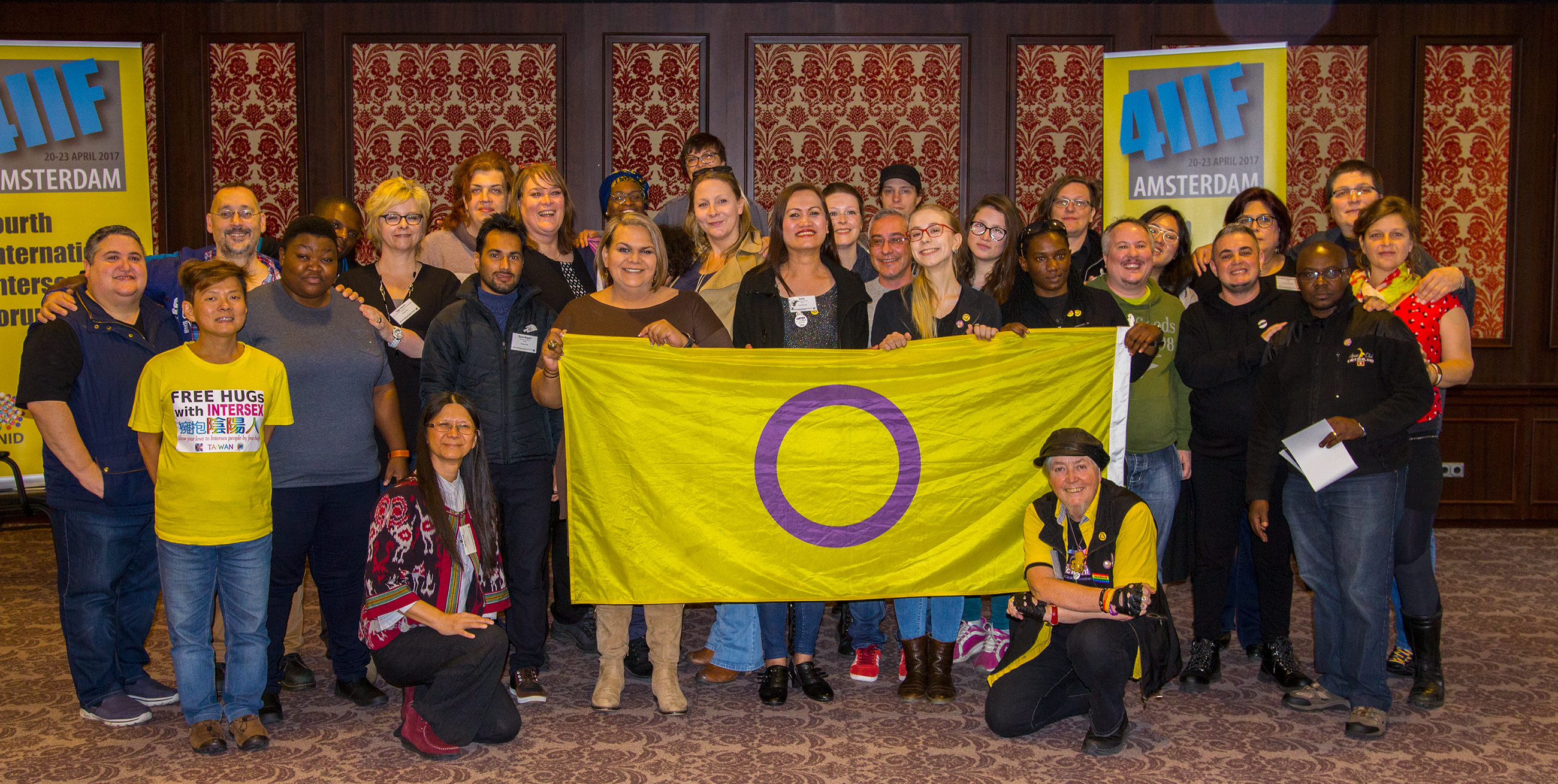 Between the 20th and 23rd of April 2017, a Fourth International Intersex Forum was held in Amsterdam, Netherlands. The world’s largest intersex human rights forum to date was attended by 40 representatives of intersex organisations and independent advocates across all regions: Africa, Asia, Europe, Post-Soviet countries, Latin America and the Caribbean, North America, and Oceania. The depth and breadth of diversity and global intersex representation at the forum was groundbreaking.

During the four day event, the international community exchanged knowledge about the situation of intersex people in different regions and highlighted widespread and horrific human rights violations that still persist all over the world. These include but are not limited to infanticide, intersex genital mutilation and other harmful medical practices, lack of appropriate and consented health care as well as discrimination in access to education, other services and employment. While intersex issues have become more visible and acknowledged since the Third International Intersex Forum in 2013, stigma, fear, shame and taboo unfortunately also still prevail.

Meeting each other serves not only to exchange information about challenges and developments in the different global regions but also serve to strengthen intersex activists in their fight for intersex human rights. “I am extremely grateful to be here! These events nurture and give me the strength, energy and clarity to continue my work”, points out Mani Bruce Mitchell, Executive Director of ITANZ in New Zealand. “Learning from each other has been an extremely positive and empowering experience”, emphasizes Dan Christian Ghattas, Co-Chair of OII Europe, “this Forum has clearly set the path for developing and strengthening the intersex movement on a global, regional as well as domestic level.”

The Fourth International Forum delivered a strong consensus that reaffirmed the demands expressed in the Declaration issued by the Third International Intersex Forum in Malta in 2013, and emphasized the unity of the intersex movement as a collaborative global movement, while also recognizing additional unique barriers faced by intersex people in some regions.

“We have welcomed the opportunity to learn from the global intersex community, make our voices heard and develop tools to continue our work for intersex people in our countries,” says  Laura Inter, Founder of Brújula Intersexual in Mexico. Irene, Co-Founder of Intersex Russia and an interACT Youth member, states, “We are very happy to be able to discuss important regional differences and have the possibility to learn from other activists from all around the world.” And Tebogo Makwati, from D’Gayle Northern Cape in South Africa, adds,“The global community of intersex people has clearly been strengthened by this exceptional event and we are proud to have added our experience and expertise to the conversation. We are certainly looking forward to supporting and getting supported by the international Intersex community while working together to end human rights violations on intersex people in Africa and worldwide.”

Hiker Chiu, Founder of OII Chinese and Intersex Asia, agrees, “As a new rising movement in Asia, we are proud to now have six intersex activists from different countries of Asia in the forum this time. It creates an opportunity for us to learn the different issues within Asia and with the other regions and also helps the world to identify and recognize the specific issues from Asia which is extremely important for us in the global intersex movement.” Morgan Carpenter, Co-Executive Director of OII Australia, emphasizes: “Regional statements, like the new Darlington Statement by Australian and New Zealand advocates or the Vienna Statement in Europe, translate global declarations into our local context. We hope that folks in other regions will also be able to meet in coming months and years, and develop concrete programs of action.”

Participants spoke about pressing global issues, amongst them a severe lack of necessary consented medical care, “There must be an end to enforcing any anatomy on people with variations of sex characteristics. We are assigned a sex at birth and the surgical and hormonal interventions aim to enforce that sex on us without taking into account our gender identity. For many intersex people, including but not limited to those with chromosomal variations like myself, this means to choose between no treatment or treatment that is against their gender identity,”says Stephanie Stine Toft, Chairperson of Intersex Denmark.

The international intersex human rights movement also recognizes and celebrates the support and the work of the international human rights system, including recommendations by the Inter-American Commission on Human Rights (IACHR), the Commissioner for Human Rights of the Council of Europe (CHRCoE) and United Nations Treaty Bodies that, as of this date, have issued more than 50 statements and concluding observations condemning abuses including forced sterilization, irreversible genital surgery and other harmful medical practices.

Holly Greenberry, Director of Intersex UK says, “In the light of growing lived testimonies and UN condemnations of member states it has become essential within Europe and all other Global regions that governments accept responsibility of signed UN treaties and associated requirements. Governments should collaborate with intersex human rights NGOs, human rights commissions and advisors to remedy condemned practices.”

In order to ensure the growth and sustainability of the global intersex movement our focus is also on the need to support of intersex youth and create spaces for young people with variations of sex characteristics. “Intersex youth from all regions need a space to come together and share their realities, build their capacities to build the next generation of intersex leaders,” emphasizes Kitty Anderson of Intersex Iceland. And Kimberly Zieselman of interACT: Advocates for Intersex Youth in the U.S. adds, “We are beginning to see real impact from an increased number of young intersex voices here in the United States. Broadening international scope is only possible with increased funding for collaborative capacity building across the globe.”

In the future the global intersex human rights movement will work to further increase regional representation. The Fifth International Intersex Forum is therefore planned to take place in a region of the Global South.

Collectively, global participants made an urgent call for more capacity and strategic funding investment in desperately needed intersex human rights work happening in every region. Miriam van der Have, Executive Director of NNID, and ILGA board member for the Intersex Secretariat, remarked on an associated discussion with donor organisations,“One of the most important outcomes of the fourth international intersex forum is that better funding for the intersex movement is necessary and possible.”

Alessandro Comeni, Co-Founder of OII-Italia stated that, “events like this forum  are crucial for our community in order to improve our local work and international advocacy. Since the first International Intersex Forum in 2011, our movement grew a lot and it is exciting to see a bigger international representation here in Amsterdam. I am extremely grateful for the amazing support of the funders that made this forum possible, but we must also highlight that available fundings allowed only a limited participation, while intersex activists willing to attend the forum were over 100. The intersex movement needs financial resources to shape itself and to grow.”

PDF version of the Media Statement